The role of the public sector

The Victorian public sector supports the government of the day in serving the Victorian community. It does this by:

It operates across several domains including:

This infographic shows the composition of the Victorian public sector according to these groups. 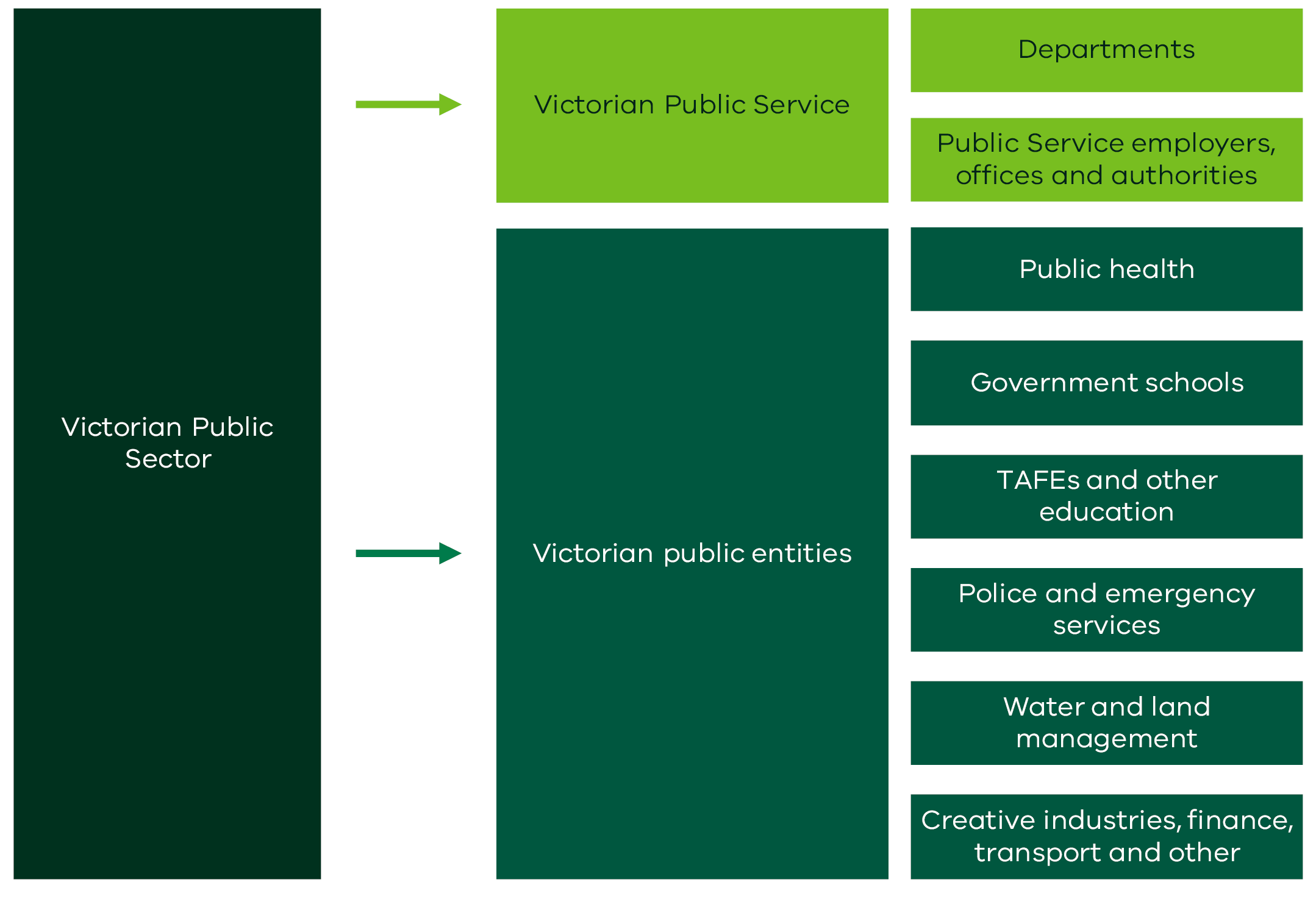 The organisations that make up the public sector is divided into two groups:

Here is a list of employer public sector bodies. Further detail is available in VPSC’s annual the State of the Public Sector in Victoria report.

The Victorian Public Service supports the government of the day. It provides policy advice to Ministers and implements government policy.

Public service employees provide impartial and objective advice. It is often referred to as ‘frank and fearless advice’.

A list of departments and administrative offices may be found in the Register of Instruments.

A portfolio is a Minister’s area of responsibility. It includes the Acts that the Minister administers and the relevant agencies in the portfolio, such as the department and public entities.

Departments are the central policy advisers and program administrators for Ministers and government. The role and status of departments is not specified in detail in legislation or the Constitution. In Victoria, some departments advise and support a number of Ministers and ministerial portfolios.

The terms ‘central agency’ and ‘line department’ are used to describe the functions of departments.

A line department, such as the Department of Transport, is responsible for policy development, planning and the delivery of specific services.

The number and scope of departments will reflect the strategy and priorities of the government of the day. The term ‘machinery of government’ refers to the allocation of functions between departments and Ministers.

Departments can be created, abolished and altered by an Order in Council under the Public Administration Act 2004.

Administrative offices are public service bodies that are distinct from departments, but have a reporting relationship to the departmental Secretary.

The Victorian Public Sector Commission (VPSC) is neither a department nor an administrative office. It reports directly to the Premier.

Key responsibilities of a public service body head are set out in the Public Administration Act.

Victoria is governed by a Parliament. This comprises the Crown, which is represented by the Governor, the Legislative Assembly (Lower House) and the Legislative Council (Upper House). This two house system is referred to as a bicameral system.

The Legislative Assembly has 88 members who are elected from electorates called districts.

The government must be chosen from the elected Members of Parliament. The party that has the support of the majority of the Legislative Assembly forms government.

It must govern in accordance with the laws passed by Parliament.

The board is chaired by the Secretary of the Department of Premier and Cabinet.

The aim of the board is to coordinate policy initiatives across the public sector. It is also responsible for promoting leadership and information exchange in the public service. The board does not have a legal status.

The Department of Premier and Cabinet provides secretariat support to the board.