This includes the composition of the sector, the key characteristics of public entities, the accountability framework within which public entities operate and the framework for determining each individual entity’s operational priorities and constraints.

The Victorian public sector performs a wide variety of functions on behalf of government, including direct provision of services to the community, provision of policy advice, the collection and administration of public money and, regulating funding and contracting private and non-government organisations for service delivery. These services are delivered through the Victorian Public Service: departments, authorities and offices, and the Victorian Public Sector Commission (VPSC); and through public entities operating in the wider public sector.

Public entities are organisations that exercise a public function but are established outside the public service. As bodies operating at ‘arm’s length’ from government, public entities perform their functions with a greater degree of independence from ministers in their day-to-day decisions.

A current summary of the Victorian public sector.

Public entities are a diverse group of organisations and undertake a wide range of advisory, service delivery, regulatory and other functions within the public sector. Victoria’s public entities include employing bodies such as hospitals, technical and further education (TAFE) institutions, police and emergency service organisations, and water and land management bodies. Also included are many public entities that do not employ staff, such as ministerial advisory committees.

Table 1 summarises the most common functions undertaken by public entities in Victoria. A public entity will often have hybrid or multiple functions.

Figure 2 below shows the accountability framework and key relationships for public entities. 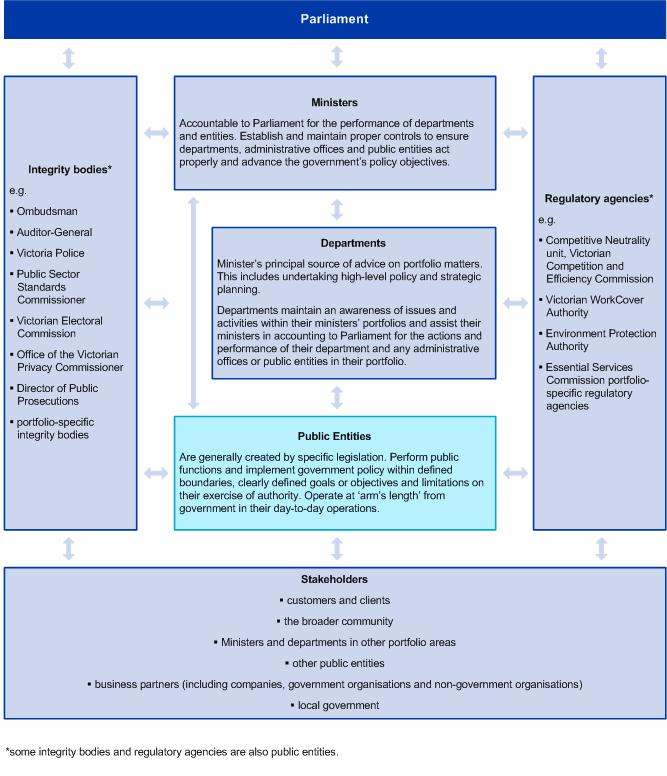 Public entities are established using a variety of legal forms. The legal form of a public entity refers to its status as an incorporated or unincorporated body and the manner in which it is created, whether that be through a legislative or a non-legislative process. In Victoria, public entities may be established using a number of legal forms, depending on factors such as the functions of the entity and the degree of ministerial control required.

All Victorian public sector organisations are ultimately responsible to the Victorian people through their minister and the parliament, within a legislative framework that allows for the flexibility necessary to respond to change. On behalf of their board, CEOs ensure that their entity fulfils its role. Public entity boards and CEOs need to know who can direct them, how, and in what circumstances.

The operational priorities and constraints of individual public entities are largely determined by:

The enabling legislation is the principal reference document that specifies the purpose, responsibilities, powers, limitations and governance arrangements for the entity. It should be read in conjunction with other legislation and government policies.

The enabling legislation can also be read in conjunction with the second reading speech – the speech given when the legislation was introduced into parliament. This speech explains the general principles and purpose of the legislation and can offer insights into the intentions and reasons for the creation of the entity. (see: www.parliament.vic.gov.au/hansard )

Enabling legislation can vary significantly from entity to entity, even within a portfolio or sector, but typically includes matters such as:

Additional responsibilities may also be conferred on public entities by other whole-of-government or sector-specific legislation. Legislative requirements relate to factors such as integrity, information handling, finance, taxation, employment provisions and occupational health and safety.

Further information on the compliance and accountability requirements for public entities is can be found here:

It is the board’s responsibility to ensure that the CEO is fully aware of all such correspondence and directives. In practice, given the full time nature of their role, the CEO should take joint responsibility for monitoring changes to government policies and priorities. Many entities also provide administrative support to their boards to monitor incoming information, correspondence and directives.

One way in which a portfolio minister can issue an entity with a direction is through a statement of expectations or statement of obligations, which outlines the government’s priorities for the entity.

Ministerial directions can also be issued without the specific backing of an Act of parliament.

Some directions can emanate from a minister other than the portfolio minister responsible for a particular public entity, e.g. the Minister for Finance.

The CEO should provide support to the board in ensuring the entity complies with ministerial directions.

In addition to ministerial directions, the way in which entities operate can be guided by whole-of-government policies and guidelines. These may be specific to the portfolio, or can apply to all entities.

Examples of government policies and guidelines that may inform the operations of public entities include:

Board Policies and Priorities

For more on the Victorian system of government see the Welcome to Government resource.